In the final phase of my PhD two BIG events take place. The first one happen on January 9th when my daughter Leona was born (nr 3 after Ella and Kajsa). Quite a little beauty and doing just well. Leona has her whole life in front of herself. Perhaps she will also take a PhD one day in a topic which interests her. But no pressure, she is fortunate to be born in a part of the world where she can be anything she wants.

Me and my dad 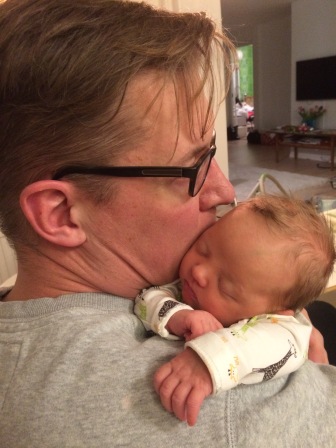 The other major event happen on February 2nd, when my dad Per Robert Helmer passed away after some illness. My dad was a surgeon during most of his active carrier, but he actually always wanted to be a carpenter and build houses. My dad was born January 7th 1943 so he just turned 73 years old. He was one centimeter taller than me, standing proud at 1.99 m. I have always called my dad “Per”. This happened apparently because my parents were influenced by some friends of my dad, (Jonas Modig I believe), who called his parents by their first name. I also call my mother by her first name, or a nick name of Margareta: “Maggan”. However, the feeling when I say “Per” or “Maggan” is exactly the same as if I had said “dad” or “mum”. That is what it is like to be born by parents from the 1940s who were a bit rebellious in the early 1970s.

I know I had a great dad, with all his human shortcomings. Although he was a typical “40-talist” (an expression used in Sweden for someone born in the 1940s) he was a very fun and loving dad. Sometimes my dad was a hero, saving or improving people´s life. I remember my old saxophone teacher in Härnösand, Rolf Hellsing, who was thrilled that Per had operated on his hand, and many of my school friends, or their parents, would at some point run into my dad for surgery or other examination. That is what it is like to grow up in a small town. Everyone knows everyone. For my own part, I have also been fortunate to have had a father who at all times could provide quick care. No need to dial 1177 (sjukvårdsupplysningen / special number to talk to a nurse) – you just ask your dad.

When I was younger we lived in Mälarhöjden, Stockholm. We lived in a red house with a big garden with several apple trees, raspberries, even cherries (bigarreaus), next to Per´s parents (our grandparents) so it was idyllic in many ways. The memories from Mälarhöjden mostly circle around the house at Pettersbergsvägen 15A and the extension we made to that, but I also remember how my dad often was picked up by the so called “Läkarbilen” (doctor´s car) for work.

Some of the friends my mum and dad used to hang out were the family Östberg and the Thelanders, just to mention a few. With the Östberg family we would join and play badminton once in a while for instance in Vårby Gård. But when I was 12 years old we had to move to another town because my dad had to find a new job. We ended up in Härnösand, but it could equally have been Vimmerby where he was also offered a job. Either way, Härnösand turned out to be a fantastic place for us to grow up in. With our dad we were mostly involved in renovating a big house in Gådeå By but also sailing a lot. Somewhere around this time he also spent one year abroad, working in Saudi Arabia and also a few months in Mo i Rana.

Per then worked at the emergency clinic at the hospital in Härnösand, merged with Sundsvall, for a decade before they decided to close the hospital and he had to move.  He then became the director of the emergency clinic in Finspång, until they closed that down (merged with Norrköping), and he started his own private surgical clinic in Norrköping. He ran one of the first private surgical clinics, and for most parts he did well here.

Most recently he lived outside of Finspång in a beautiful area known as Stenstorp with Elisabeth. There he renovated a house, had sheep, worked in the forests, planted trees, made planks from the wood which he built other things with. The favorite place we had was the small boat house with a small landing-stage (brygga). We have picked blue berries, mushrooms (chanterelles), etc and really enjoyed the countryside there, including the many sheep they used to have. All children of Per and Elisabeth enjoyed going to Stenstorp for relaxing and just hanging out. Per had five children (me, Johan, Hedvig, Frida + Sofia) and Elisabeth three (Thomas, Åsa + Sofia). In Finspång the family Krig became important to my dad and Elisabeth, but also to us. 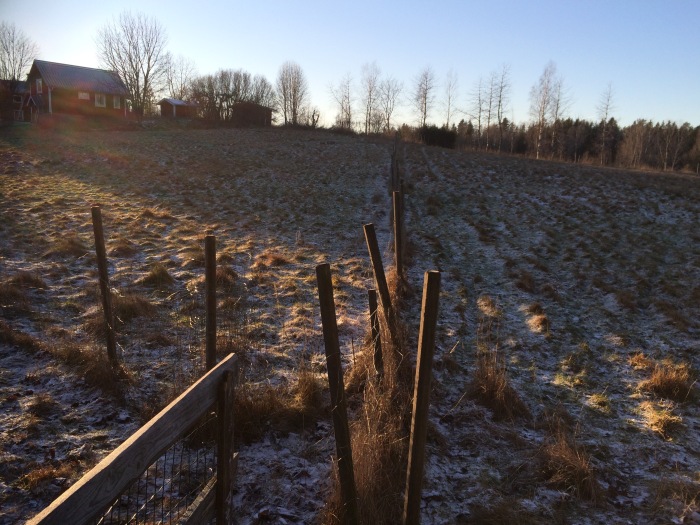 My dad experienced a lot of things, such as seeing his father Lars Engström build Villa Engström with architect Ralph Erskine at Lisö, or when me, and his friend Tosse sailed to Fårö.

When he was young he was quite close to his grandmother Signe, who was quite nice to her grandchild. I know she helped him early on to finance the purchase of an MG (wish he had kept it…). A story we remembered when being young was when he was driving it very fast, at 180 km/hour, and the clutch stuck to the floor. (One need to remember that most cars really were not as good as the cars are today, or the roads, so this was fast….then). We liked hearing about that. Our dad was a rebel in many ways. He had one brother (Anders), and two sisters (Kajsa and Kersti). His mother, my grandma, was Eivor, known as Eve. Lars and Eve came from Lidingö, but moved to an apartment in Västberga, before finally settling in on Pettersbergsvägen 17 in Mälarhöjden.

When we were young we did a lot of sailing in the Stockholm archipelago and in the winter we would go ice skating on the Baltic sea or go downhill skiing in Idre.

My dad had a lot of friends, one being in particular network of doctors, artists and writers known as “Pepparkaksordern”. This group of close friends enjoyed life and did have get togethers frequently. To me, all of the individuals in this group are unforgettable characters, legends, and I know that one could easily make a movie about the adventures of this group. Below are some of them, others include Nito (Joaquin Masoliver), Jonas Modig, and many more, with their wives . They would meet several times a year to have dinner and just enjoy life, circling around a common interest in art and literature, more recently they found inspiration in the so called Folke Dahlberg sällskapet. The friends in Pepparkaksordern were very important to my dad, and one of the things my dad was good at was to make sure they would meet often. He and Elisabeth showed enormous hospitality, as he did also when he was younger, either at his parent´s home in Mälarhöjden or at Villa Engström at Lisö.

My dad lived for most part a great life. Of course there are tough times, but for most parts he had fun, he saw the world, he had many friends, and was always on to some fun projects, apart for the last few years when Parkinson slowed him down gradually. He was always very found of growing things in the garden. When we were younger he had a big field of potatoes, and more lately he kept his fingers green in the garden at Stenstorp. 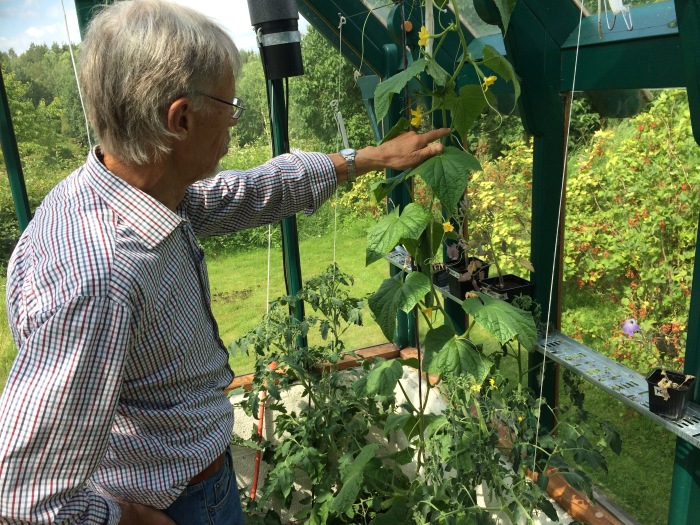 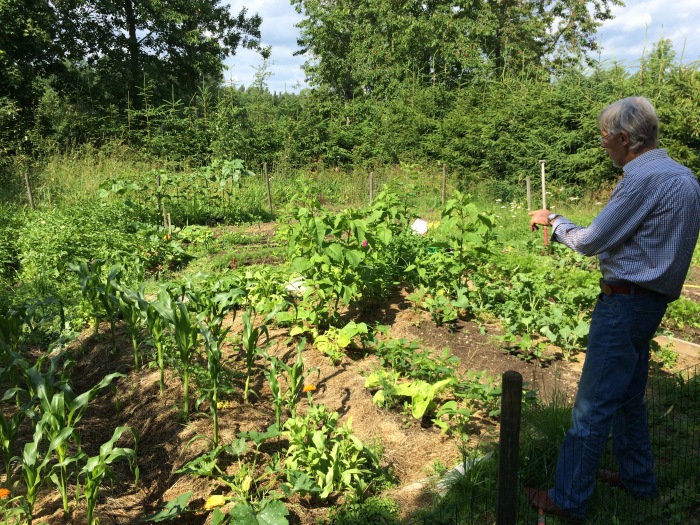 A couple of years ago, my sister Sofia lived in New Zealand, and Per had a chance to visit her there as well.

His favorite music was jazz, and throughout his life he enjoyed listening to Charlie Parker, Miles Davis, Duke Ellington, Art Blakey and the Jazz Messengers, Roland Kirk etc. I know he saw several jazz artists in the 1960s with his friends Jonas Modig, Tomas Jansson, Gudmund Blomgren etc and took many photos of the artists while they performed. During a few years in the 1980s he was also a fan of Dire Straits, and more recently he fell for the music of Emmilou Harris. I know that my dad´s interest in jazz must have influenced me when I was younger, although I never intentionally think I did that. My dad also played saxophone when younger, but I believe he never got very far, but during the last few years he bought a soprano sax in an attempt to pick it up again. He really liked listening and “digging” to jazz, watching his foot move with the jazz beat.

Thank you dad for all these years, for my sisters and brother and for many memories.